The concert UNITED- A Celebration of Youth and Children's Choirs that took place on 19th April 2015 would like to thank all supporters for attending the concert. We hope you have enjoyed a very special night of music and song. The concert that was sold out a month before the date saw more than 650 audiences with 400 singers in one night: The largest concert that Victoria Concert Hall has had since their re-opening in August 2014. Once again, Thank You for all your support!

Darius Lim will premiere 2 of his new choral works this week: "From Ashes To Dust" performed by East Spring Chorale and "The Water Dance of Lluvia" No.4 from 5 Elemental Dances for Youth and Children's Choirs by Temasek Chorale. Watch their performaces this week at UNITED- A Celebration of Youth and Children's Voices- 19th April 2015 at Victoria Concert Hall. 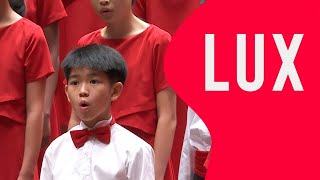 World Premiere of Lux by the Singapore Symphony Children's Choir

World Premiere of Lux by the Singapore Symphony Children's Choir